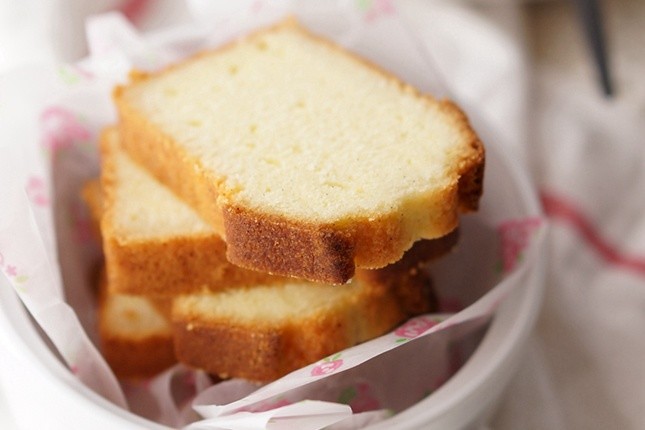 Please refer to the tips below before making it

Pound cake, also known as cream cake, is a common basic cake. The status of pound cake in the cake world is the same as vanilla ice cream in the ice cream world. Pound cake originated in England in the 18th century. A pound cake at the time consisted of only four equal parts: 1 pound of sugar, 1 pound of flour, 1 pound of eggs, and 1 pound of butter. Because each ingredient accounts for 1/4, it was spread to France, and similar cakes were also called quarter cakes.

The recipe for this cake comes from “Mr. Kojima’s Cake Teacher”, because it uses fermented butter and vanilla pods, and the butter is fully whipped, making the cake very delicate. It melts in your mouth and even tastes like vanilla ice cream.

The amount of the recipe is the amount of one rabbit lily pound cake mold, you can adjust the amount according to the size of your own mold.

1. It tastes better with fermented butter. I used the Isney Butter Roll myself and it was delicious. The President’s unsalted butter rolls are also great.
2. The butter must be fully softened. Now that the temperature is relatively low, you can use a hair dryer to blow the butter a little first, and then use an electric egg beater to whisk at the fastest speed.
3. The eggs are heated to 20 to 30 degrees in advance.
4. It is best to add the powdered sugar in two times, after the first addition and beat for dozens of seconds, then add another time. Also, no sugar reduction is strongly recommended. Don’t cut sugar, don’t cut sugar.
5. The butter should be completely beaten. If you are not sure, you can follow the time in the book. Before adding the eggs, beat for about five minutes, and then add the eggs for about two minutes each time before adding the next time.
6. Eggs must be added in batches, three to four times. If you add too many eggs at one time, the oil and water will separate easily.
7. The batter of the pound cake must be mixed in place, and the finished cake batter should be very shiny. According to the stirring method in the book, the dry powder will not be seen after about 30 times, and then continue to stir for 60 times, for a total of 90 times.
8. After roasting, it can keep its sweet taste from the day to a week. Store in the refrigerator and return to room temperature when serving. If stored properly, it can be stored for 20 days.